How Do You Value Networking? 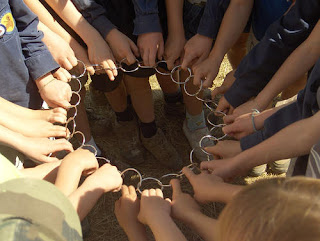 This past Monday, I attended an event at Thompson University here in Kamloops to strengthen the relationship between the university and ten local high schools in the Kamloops area.  At the meeting, there were university staff members including a couple of professors, recruiting specialists, and student engagement coordinators (what a cool position) along with high school counselors, principals, and our Trades and Transition Coordinators.  There was a great deal of rich dialogue which provided me with a broader understanding of the successes and challenges each level faces when moving students from secondary to post-secondary education.

During the course of the day, we were fortunate enough to spend an hour listening to a panel of former students from our schools (including one from South Kam, which was great--wow, they grow up fast.  Fourth year already!) who are currently attending TRU.  There were some pre-planned questions to start the discussion, and then we were able to ask questions from the floor.  One of the questions that came from one of the high school counselors was of particular interest to me.  The question was, "If there was one skill that we could have done a better job of developing for you, what would it have been?".

The answer by one of the panelists that was quickly followed by emphatic nods from the rest of the panel:

"If you could have taught us how to network"

When I heard this answer, I was surprised...but once I processed it, I was not shocked.  Surprised because I suspected that the skill might have been something different, maybe "time management" (which was mentioned later), or "self-regulation" (something that I might have found useful) or "how to research" (which I am still trying to figure out).  But this group was made up of students ranging from freshmen to seniors, and they were already starting to think of their transition from their post secondary studies to the workplace, and how important connecting to others was in that process.

I began to reflect on how we value networking in our system.  I thought about my own networking, and how it has changed in the past few years since I became connected through social media.  How I have developed meaningful relationships with people that I have never met face-to-face, and when I have in fact been lucky enough to meet some my personal learning network face-to-face, the greeting is more likely to be a hug rather than a handshake.  A sad fact that I also have come to realize is that I tend to network more with people that are thousands of miles from me rather than my fellow administrators who are just a few blocks or neighbourhoods away from me.

Prior to 'getting connected', I was usually (but not always) able to pluck up the courage to make a phone call to someone that I didn't know, to stop someone to chat at a conference, or to stop in to visit a school that I had always wanted to visit.  But the actual skill of networking was never taught to me, and even with the myriad of tools available to connect with millions of people all over the world, 'network' and 'guesswork' still go hand-in-hand for me.

I can't imagine what it is like for kids.

Now right away, techno-lovers (including myself) would say "kids are on Facebook, they are more connected than they ever have been!".  True.  Many students ARE more connected.  But are they making those meaningful and productive relationships that will help them to find what their passion might be, what their occupation might be, and to create the support networks in those areas that will allow them to become reflective practitioners of whatever it is they might want to do?

And if we in our schools do not teach these skills of making good connections, if we do not teach students about what it means to be a digital citizen, if we do not teach them to reflect upon what others may find when they are Googled, their Facebook pages, their Twitter messages, their YouTube channels, then what service are we doing to these students as they move forward.  Or even worse, what are we saying when we do not allow them to use technology in our schools, when we lock down the wi-fi, and ban smartphones.


So, in your organization, do you teach these skills?  Do you give students the chance to network with each other in the class, in other classes, and in other schools near and far?  Do you find opportunities to allow them to connect to different members of the community? And along with teaching those skills in classes, do you have someone dedicated to teaching digital citizenship and digital literacy to students AND to other teachers and administration in your school with the idea of creating a network? Do staff meetings have a piece around this? At the district level, are you encouraging your administrators to develop networks to expand their perspectives?  Do you have this as a part of district administrative meetings?

I know that the university focus group really hit me between the eyes, and made me ask myself

"How do you value networking?"

Posted by birklearns at 7:36 PM

Thanks for taking the time to comment on my blog!